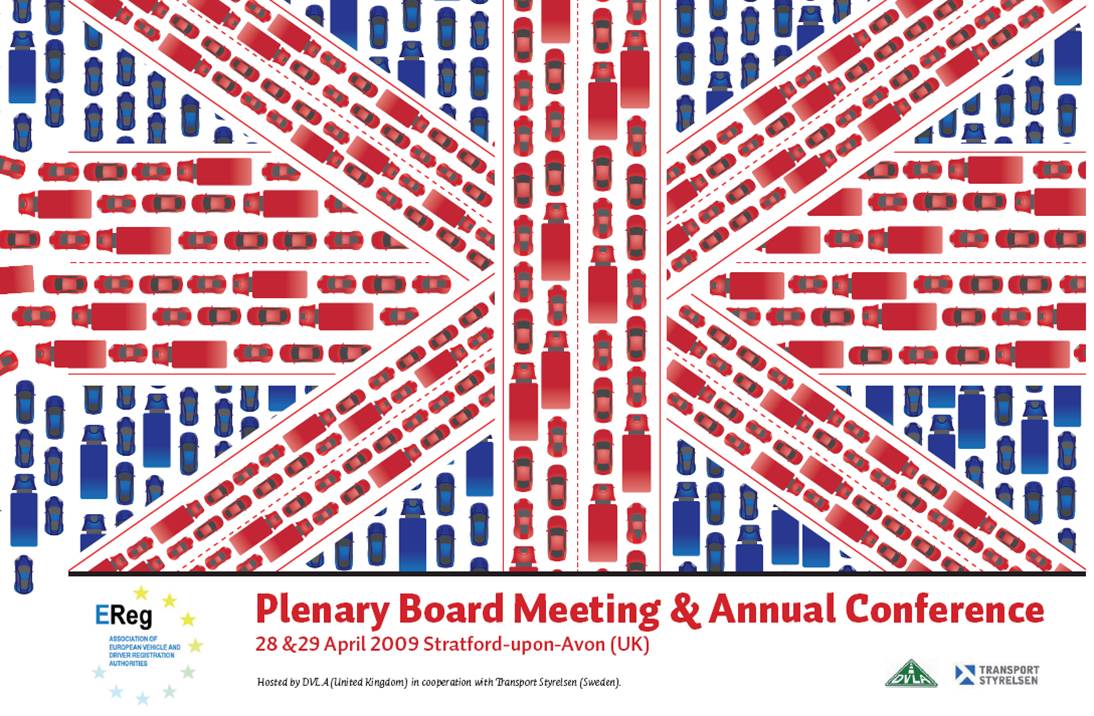 On 28 and 29 April 2009 the EReg Annual Plenary Board Meeting & Annual Conference of the Association of European Registration Authorities (EReg) took place. The two-day conference was this year organized by the United Kingdom in cooperation with Sweden. Location was Stratford-upon-Avon, the well-known birth place of William Shakespeare.

25 European countries - approximately 70 participants - were present at the Conference. This year France was also present for the first time. Special guest was Ms Isabelle Kardacz, head of Unit Road Safety of the European Commission (DG-TREN) who opened the conference with a speech and was present during the whole conference. The presentations and discussions gave her a good view on the subjects that are important for the EReg members. It also was made clear which points of view the European Registration Authorities have concerning important subjects such as the chip on the driving licence, end-of-life vehicles and international data exchange.

Mr Hans van der Bruggen, President of EReg, and Ms Kardacz of the European Commission both declared themselves in favour of a closer cooperation between EReg and the Commission. This closer cooperation with the European Commission was also mentioned as one of the most important agenda items of EReg in the coming year. In addition, energy will be invested in a further professionalization of the EReg Topic Groups as well as a good relation of EReg with similar European organisations (such as CITA, CIECA and ECR). At the Plenary Board Meeting it was also announced that EReg will examine on which legal basis - which at the moment is still informal - the cooperation can be based on in the future.

At the EReg Annual Conference no less than 11 interesting presentations were given concerning several actual subjects, such as the chip on the driving licence, certificate or professional competence (CPC), international data exchange and the vehicle end-of-life directive. At the meeting two of the EReg topics Groups presented to their final report to the EReg members. In the next weeks proposals for two new subjects (CO2 monitoring and the fifth motor insurance directive) will be drafted in order to start new EReg Topic Groups on these subjects. It was also agreed upon that the subject temporary vehicle documents will be an additional subject in the already existing Topic Group about Harmonization of Commercial and Temporary Plates.

The participants labelled the conference as very successful. The EReg members especially valued the good progress of the eight EReg Topic Groups.